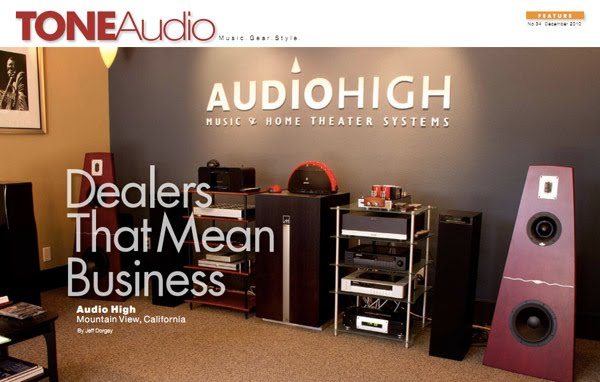 Two things immediately come to mind when walking through the door of Audio High in Mountain View, California: this is a serious hi-fi store, and mascot Fiona (an adorable soft-coated wheaten terrier) has a very comfy gig.  With many of audio and video’s best brands on display to experience, this store feels like the glory days of hi-fi retailing, with a 21st Century twist.

As you walk into the main showroom, the Sooloos music server is front and center, with an AVID Acutus turntable nearby. There are multiple amplification and speaker choices from KEF, Meridian, Chord, Burmester and Peak Consult, just to name a few brands.  And this is a big room, so you can actually sit down and experience these components in a lifelike environment.  Audio High is open Monday through Saturday from 11 a.m. – 7 p.m., but as owner Michael Silver says, “A lot of our business is by appointment and from repeat customers.”

Though they have a steady clientele, not a week goes by that the staff at Audio High doesn’t expose at least a few people to high-end audio who have never had the experience.  “It’s always the same: people come in here that have been used to listening to music on iPods and earbuds and they can’t believe that music can sound this good,” Silver said.

A Strong Interest in Music and Technology

So much of this comes from Silver’s own love for music.  A classically trained pianist, he mentions that his parents “actually listened to a lot of folk music, but there was always music playing in the house. I even saw Pete Seeger when I was very young.”  But Silver was drawn to classical music at an early age.  “It’s a combination of the emotional and the intellectual aspects.  When you look at the score to one of Beethoven’s pieces, you can hear it a hundred times and still discover something new.”  It’s no surprise that he considers Beethoven’s String Quartet No. 14 in C# Minor, Op. 131 “the best piece of music ever written.”

Silver was always involved with technology.  He always had a great audio and video system when young, going straight to Apple after college.  During his college years, he helped people put systems together.

After Apple, he was selling gear part time from his house, and increasing his network of clients. “I dabbled a bit over time and at one point felt I could do this as a real business. I started selling gear in 1997 to raise money for charity, and I was doing so much business out of my house that I needed a real store.”  In 1993, his first hi-fi shop was born.

After a few years, he moved to the current location. Having rented space in the unit next door for six years, Silver ended up purchasing the entire building and was able to rebuild the current space to his specifications, which included powering the whole building with solar power. “We’ve always run the company as a green business because it’s the right thing to do.  Recently, the state had a program to become certified as a green business and when they came by to examine us, we were already doing everything on the list.  When we added the solar power to the building, we installed enough capacity to run the whole building.”

In addition to being environmentally friendly, having all that clean power on tap had a side benefit – and a slight detraction. Silver laughs, “It used to be a lot easier to demo power-conditioning products in the old building because the power was terrible there.” Currently, every outlet supplying audio and video gear has a separate 20-amp circuit, with audio and video demo rooms powered by their own electrical panel.

The Importance of Two Channel and a Proper Demo

When asked about the ongoing strength of the two-channel world, Silver remains optimistic. But because many of his clients have a wide range of needs, he is open ended in his analysis.  “We fulfill our clients’ needs, and there is a lot of overlap.  Recently, we had a client add a pair of $170,000 speakers to his theater system because that’s where he listens to most of his music, so is that a two channel or theater?”

But two-channel is very important to Silver, and having the extensive inventory on hand to demonstrate is critical.  Often, a client will walk in the door with multichannel in mind, but after hearing the difference between what $10,000 will buy in a multichannel system versus the same amount in two channel, that customer often leaves the shop with a two-channel system.  “Personally, I’ll always want to listen
to music on a great two-channel system,” Silver says.  “You can see how much floor space we’ve dedicated to two channel.”They do not focus heavily on analog, though they do stock it.  There was an AVID Acutus on display, but they do not sell a large quantity of turntables these days. 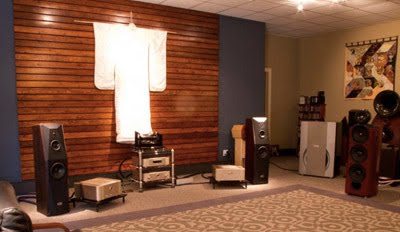 Walking down the main hall from the main two-channel showroom to the large theater room (which features a Meridian 810 projector), one can’t help but notice a smattering of photos of Silver’s most notable clientele: Carlos Santana, Herbie Hancock, Francis Ford Coppola and Keith Richards are just a few of the people who are regulars at Audio High. Silver feels that this definitely helps the business, “When people come in the store and see the level of clientele that we work with, it definitely helps. Many of our music- and film-industry clients are referrals from others in the industry.” Silver smiles. “We sell a lot more tube amplifiers than we do turntables, but we do love vinyl and have fun introducing (or reintroducing) people to it…”

I can’t stress highly enough how critical it is to have a wide range of strategically picked gear to not only help a potential customer hear the difference between products in a manufacturer’s line but to demonstrate the quality range of an entry-level system all the way up to a no-holds-barred system. I would place Audio High among the best retailers I’ve had the pleasure to visit in this respect. Silver mentions that his extensive inventory has helped them to close a very high percentage of sales.

Coming full circle with Silver’s love for music, he has managed to build more awareness for the store by sponsoring concerts each year, with the benefits going to charity. This year, they are sponsoring a Beethoven series featuring world-renowned pianist Robert Silverman.  The series started in September and goes through April 14, 2011.  Though they have a very healthy business, he would like to expand his reach in two-channel audio during the upcoming year. “We’re considering cross-promoting with some of the car dealers along with a few other likeminded companies.”

The key to running a great store is customer service and a willingness to introduce new music lovers to the world of high-end audio.  During the better part of the day that I spent at Audio High, everyone who visited the store was treated with the same level of friendliness. Their main sales person, Eugene, even had a spirited conversation about music with the mailman.

As I leave the store, Eugene has just finished spending some time with a young customer looking at headphones in the $200 range.  He smiles and says, “Here we go again, this is where it begins.”