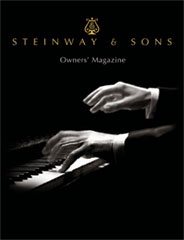 What do Herbie Hancock, Wynton Marsalis, Keith Richards, Benny Golson, and Robert Silverman have in common? Well, aside from all being enormously talented and successful musicians, they have all sought the help of one man.

Michael Silver is a classically trained pianist who prefers to play for his own enjoyment and make his living helping to bring the music of others to life for the rest of us.

We asked him about his experience working with musicians.

“Musicians are great because they know what live music sounds like, and when they hear that reproduced on an audio system, they get really excited. I remember the first time Benny Golson heard the Tetra 505 speakers at his home he was literally hopping up and down, exclaiming, “I’ve played with Coltrane hundreds of times, and that’s what he sounds like! THAT’S what he sounds like!”

Saxophonist/composer Golson has written more jazz standards than any other living composer. He was recently featured in Steven Spielberg’s The Terminal because he is so beloved by so many.

“Since Adrian Butts, Tetra’s chief designer, experimented with his father’s speakers at age five, it’s been his life’s work to create speakers that really sound like music. He has always been a huge fan of the Rolling Stones, so you can imagine what it meant when Keith Richards was so impressed with his Tetra 405s that he asked Adrian and me to spend a couple of nights together listening to music.”

Tell us how you put together an audio system for someone like this.

“Well, the goal is to create, in the client’s space, a real and emotionally engaging experience. Soundstage—the ability of a system to recreate instruments in space as though people were standing there and there and there—is just one aspect of a good system. Equally important is something a lot of systems miss: the ability to make instruments sound real. I can’t tell you how many people have never heard a really good music system and just go slack when they realize what’s possible and what they’ve been missing.

“Two comments we hear regularly are how utterly Tetra speakers ‘disappear’ and ‘I’ve heard this piece hundreds of times and I’ve never heard that before.’ Herbie Hancock even told us he was hearing things he remembers playing but thought were lost in the mixing.

“Steve Hoffman, one of the best-known mastering engineers, uses Tetras. The day we installed his 505s he had been working with Paul McCartney in his studio and remarked, ‘Even though I heard that same tape yesterday, today it was like I was hearing things for the first time. No exaggeration.’

“Then there’s Grammy winning producer/engineer Rob Fraboni who’s worked with many giants like Dylan, Clapton, Lennon, and Richards. Rob fell in love with the Tetra sound and approached Adrian to co-developed a new flagship speaker. I can’t wait.

“Of course, you also need a good system to drive these speakers. My favorite amp in the world is the Chord SPM 6000. For the money, the sound quality, and the sheer beauty of this product, there is just nothing else like it. Chord is well known by professionals because their products are used in a large number of studios around the world, including Abbey Road, Lucasfilm/Skywalker Sound, EMI Japan, the London Royal Opera House, Paul McCartney Studios, and Ray Charles Productions.

“Chord makes a full array of products, including a world-class CD player that is truly unique. Couple this with Tetra speakers and oh, say, Robert Silverman’s Live at the Chan Center, and I’m in heaven.”

These are pretty remarkable musicians. What are they like to work with?

“Let me tell you about a few memorable experiences. The first was when Adrian and I sat with Keith Richards listening to music for hours on end. We listened to a surprising array of music, but mostly R&B, and on a few pieces Keith played along on his 1931 Martin. You wouldn’t believe the soul this man has. He’s truly passionate about music. No ego. Just a good man who loves music.

“When we set up Wynton Marsalis’ system, he and I had time to enjoy five games of chess together. I’ve worked with a lot of famous people, but I just couldn’t believe I was playing chess with Wynton. I was giddy. Then we listened to music together on his new system and he listened with such intensity that all the lights in New York went out. Afterward we went down to the Village Vanguard together to hear his friend Wes Anderson. It was a great night.

“Last, I was passing through L.A. with my wife, daughter, and our two dogs and we stopped by Herbie’s house to tweak his system. While Herbie and I were upstairs, his wife and my family enjoyed a fire, had tea and cakes, and talked girl talk. When the boys upstairs were finished ‘playing’ we came down and Herbie sat at his piano and enchanted us for about 30 minutes as our dogs slept in front of the fire and we basked in the most perfect setting you could imagine. That experience will live in my heart for the rest of my years.”

Michael is the owner of Audio High in Mountain View, California and provides music and home theater systems to musicians and music lovers across North America (see www.audiohigh.com for contact information).