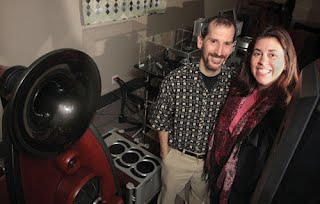 For many people, a small speaker that lets them listen to the music on their iPod is enough. The customers that shop at Audio High are not those people.

“Herbie Hancock has been a client for a number of years,” said co-owner Michael Silver about the famous jazz pianist and composer. “I remember one of the first times I was standing with him in his studio, and we’d put in this new system and he was listening to this old recording of his. And he said, ‘I just heard a note on there that I thought was lost in the original mastering.’ He was so surprised that it was still there and he could hear it.”

“That part of the job just blows you away,” she said.

Audio High, which started modestly in the Silvers’ living room in 1997, sells extremely high-end audio and visual equipment for people who know the difference and are willing to pay for it. Audio High’s client list reads like a who’s who of musicians and media professionals, including Keith Richards, Wynton Marsalis and Francis Ford Coppola. You won’t find the things they want at your local Best Buy. Some of the products Audio High sells run into the hundreds of thousands of dollars. Yet for the true audiophile, quality is worth the price.

The company is doing well financially. Profits are up more than 200 percent in 2010, Silver said, after an admittedly slow year in 2009 due to the economic slump.

Still, in some ways the bad economic times were good to Audio High, a purposefully small and nimble operation with a specific niche.

“In this industry, a lot of the bigger stores, especially stores that had grown too quickly, went out of business,” said Claire Silver. “That really helped us, because for some products, suddenly we were the only place that was left.”

High-end audio was a passion for Michael Silver from a young age, but it didn’t become his business until much later. He got his start at Apple Inc. in the 1970s, working as a project lead for Applelink, an early online service that would later form the backbone of America Online. Audio High started as a side business putting together high-end audio systems for people he knew. It wasn’t until the company grew from a living room business to one that filled the whole house that he and his wife decided to turn it into a full-time business.

From the beginning, the couple made philanthropy an integral part of their operation when they formally launched as Audio High in 2003, donating part of their earnings to Cystic Fibrosis Research Inc., a nonprofit that funds research for cures for the life-threatening genetic disease, among other charities.

The company also organizes numerous benefit events for nonprofits, such as a 2009 concert with Carlos Santana.

This commitment helps the charities but also helps the company, said Claire Silver.

“These events we have are really good promotionally,” she said. “They connect us with people and get our name out there in a way we feel really good about.”

Audio High gets about 10 percent of its revenue from corporate jobs, Michael Silver said, such as a recent contract to calibrate all the monitors at Electronic Arts Inc.’s Redwood City campus. It has also done similar calibration jobs for Hollywood production studios and even worked internationally — Flextronics International Ltd. hired the company to do automation and A/V work for its offices in Hong Kong.

Most of Audio High’s business comes from individuals, however. It’s not just sales, either — a certified electrician and contractor, Michael Silver and his team also do the installation, rewiring, calibration and low-level construction work it takes to turn a spare room in the basement into a high-end home theater. Silver said the company has an average of 30 jobs of varying sizes going on at any given time.

One such job was for SmugMug Inc. CEO Don MacAskill, who hired Audio High to convert the basement of his new house into a home theater room, a project that meant gutting the interior and building it from the ground up.

While Silver’s expertise was impressive, MacAskill said, it was the special attention to customer service that stood out. For example, MacAskill’s 4-year-old wanted to have a “Star Wars”-themed birthday party, despite having never seen the films. MacAskill hoped to finish the home theater room in time for the party, but it didn’t work out.

Silver offered to let them use the $700,000 setup in Audio High’s showroom for the party. When they showed up, the Audio High team had decorated the entire store in a “Star Wars” theme, and it had “The Imperial March” cued up on the store’s sound system to play as they walked in.

“It was really over the top and really awesome,” MacAskill said. “We thought we were just going to show up and hit play, and instead they had really gone out of their way to make it special for my son.”